Luke Greiner of the Department of Employment and Economic Development and Kelly Asche of the Center for Small Towns examine interpretations of employment and job data to point out the difference that nuanced distinctions can make.

When we travel around to different regions of the state, we commonly hear: “we have jobs, we just don’t have workers.” The lack of workers to fill vacancies is a big enough problem to non-profits and government agencies that many have begun prioritizing this issue and are developing programs to help alleviate and solve this problem.

However, this seems to run counter to a prevalent narrative in the media and within our communities: rural areas lack job opportunities. For example, The Daily Yonder published a post stating  “rural America enters 2017 with fewer jobs than in 2016” just a few weeks ago. One reason we can have such mixed messages can be due to the misuse of data leading to incorrect interpretations and resulting conclusions.

The author of the Daily Yonder article made a critical, but easy, mistake; the narrative refers to “jobs,” while the actual data used to construct their statistics and visuals are actually “employment.” This is a big difference. The employment data is from the Local Area Unemployment Statistics (LAUS) and measures the number of “workers” not “jobs.”

Why is this distinction important?

For one thing, workers refers to people, whereas jobs refers to positions within an establishment. How many workers do you know that have two jobs? Probably quite a few.

LAUS data also has limitations in regards to small sample sizes for sparsely populated counties affecting the accuracy of monthly estimates, and the fact that county level data isn’t seasonally adjusted; the process in which predictable fluctuations in the data due to normal, seasonal events such as changes in weather, harvests, major holidays, etc… are eliminated from the data. Comparing a single month of LAUS employment data could easily be revealing the impact of weather patterns instead of economic conditions.

First of all, you should recognize the significant difference when using the quarterly average of the LAUS data and the monthly data point comparison from the county map of Minnesota in the original article.

In the article, only 7 of Minnesota’s 87 total counties had an increase in the number of workers. When using the quarterly average instead on the monthly average, that number jumps to 42 counties with more workers.

However, a more appropriate dataset to use when discussing the number of jobs is the Quarterly Census Employment and Wages (QCEW).  This data source produces its numbers through employer unemployment insurance tax records and is very accurate. When comparing the number of workers (LAUS) vs. jobs (QCEW), we also see some significant differences. 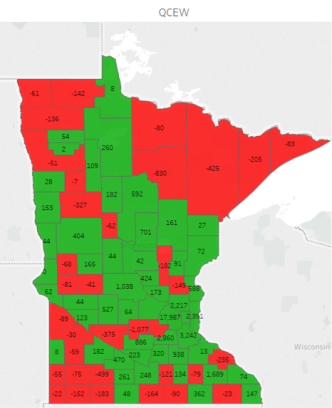 In the LAUS quarterly average, 45 counties (52% of MN counties) had less workers while during the same time period, the QCEW reports that only 35 counties had less jobs compared to the year before.

There is a more interesting narrative here that relates to opportunities. Of the 20 counties that gave opposite directions regarding jobs and workers, 15 of them indicated having job growth but a decline in workers. Of those 15, 12 were rural counties.

We can also get some interesting context around job opportunities in various economic development regions from the job vacancy survey produced by MN Department of Employment and Economic Development (DEED). When we compare the number of job vacancies in 3Q 2012 to 3Q 2016, we see some of the most rural regions have seen the largest increase in job vacancies. For example, region 6W had the highest amount of job openings on record last year and nearly 200% more job vacancies (nearly 370 positions) now compared to the end of 2012.

This interpretation of the data gives us a more nuanced view of the economic situation in rural counties. Perhaps the issue isn’t about the lack of opportunities, but more about connecting folks to the opportunities that already exist.

The purpose of this exercise is not to point out errors, but to highlight the nuanced ways in which data can inform us and the drastic difference that can make in economic and community development strategies. With one interpretation, the focus would be on growing jobs. However, a more accurate interpretation would focus on growing the available workforce in some regions, while creating jobs in other regions.

This article provides an example of how knowing the details of the data you are using can significantly influence your interpretation and the resulting narrative.

All data was gathered from the Minnesota Department of Employment and Economic Development. This department is an excellent resource for economic data and interpretation.

One thought on “Getting it Right: The Influence of Data Interpretation on Development Strategies”